Grave Diggers always work at night. They sneak around undetected in the mist and silence and are comfortabl 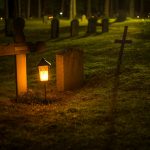 e with their ghostly companions. Billy Evers was no different. He knew the older graves usually held more treasure and he had a knack for choosing the lucrative ones. Wedding rings, silk suits,

(why all they need is a good cleaning!)

necklaces, so much to choose from. Of course often he would find nothing but rot, decay and gas. He was used to the smell.

“John D Fjord” was the lucky winner tonight. Billy tipped his hat and started digging. He whistled softly to break the silence as his muscles protested against the hard earth. Summer heat baked the earth but the rain softened it. Winter froze the ground into concrete making it much harder to break in. The only benefit was that he was guaranteed that nobody would wander into the graveyard in the chilly dark.

Sweat pouring now he kept going. “Clunk” it was the coffin and his heart jumped. Billy looked around but his only companions were wisps of mists and vampire bats. Hoping it would hold great treasure, he shoveled carefully, his spade making a scratching noise along the wood.

Wiping the last of the sand off, he pulled on the lid. It was stuck fast.

‘What the hell? Its nailed shut, that’s a first’.

Using the knife he kept in case of attack, he pulled at the nails holding it closed, eventually they pulled free, leaving worm tunnels into the coffin. He wiped his sweat on his sleeve, feeling cold and hot. The lid opened easily now and he breathed a sigh of relief and anticipation.

Billy noticed a few things immediately. John D. Fjord had a look of terror and agony frozen on his dead face. His curled fingers were missing their ends. The stumps were bloody and stuck up like claws, forever tearing at the lid of his coffin. The lid itself was scratched and covered with blood. Small, white debris in the blood caught his eye. On closer inspection he realized they were his nails, ripped out in terror and forever preserved in blood and wood. John D. Fjord had been buried alive!

Billy reversed in horror, a thin, high scream escaping from his throat. He climbed out of the hole and lying on the wet grass he tried to get a grip on his fear. Eventually his breathing slowed.

‘What the hell do I do now? If I cover him and leave, no-one will ever know he was murdered. The nails…’ Billy gulped fresh air and made a choice. He would refill the grave and make an anonymous call. He hesitated knowing that he would have to climb back into the hole and make it look like it did before he made the STUPID! stupid decision to keep going.

Gingerly he climbed back down, sweat again streaming into his eyes, his stomach turning at what this man must have been through. His fingers were stumps for heaven’s sake!

Billy filled the grave in double time, his eyes stinging. He cleaned up as best and as fast as possible. All he wanted was to get out of there.

‘Who was murdered?’ the policeman asked.

‘John D. Fjord. He … he’s buried in the graveyard in Harbor Road. He’s been there a while.’

‘Just go…” shaking he put down and headed out of the area.

“The police would like to interview the person of interest who reported that John. D Fjord had been murdered. The call was placed around midnight last night from a phone-booth close to the graveyard. The police would like to know what he was doing there at that time on night. Further inspection of the grave showed that Mr Fjord had been buried alive and that his coffin was nailed shut.’

It was the last grave Billy ever tried to rob.