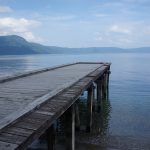 The creature hung under Pier 4. Watching, waiting. He was hungry. Impatiently he waited for his supper to come to him. He could just see down the beach, muscular arms easily holding him up out of sight.

Pier 4 was the last on the beach, furthest out and in need of repair. The first 3 piers were better maintained and the council had plans to convert them to concrete but Pier 4 would be last, if they did anything with it at all. Since the closure of Beach Road, it stood alone, slowly being eaten by the sea. Which is why the creature was so hungry. Not enough pickings, no-one wanted to walk that far down to the rickety pier.

‘No! Someone’ll see us.’ Giggling.

‘They can’t see us from there’ he pointed to Pier 4. It was getting dark and most of it was in shadow. Brandy giggled again. ‘Maybe…’

They came closer, the creature smelt them. He waited, every muscle tensed ready for the kill. Brandy stopped to look at shells and sand until Rob wouldn’t wait anymore, he pulled her under the pier and pawed at her shirt. “Slowly’ she giggled. Checking around for other people. They were alone, so she thought. Rob lay her back on the cool sand, kissing her, slowly undressing her.

He hung above them smelling them. He dropped to the sand behind Rob, the waves masking the noise. He stood to his full height, close to 7 feet and whistled through his gills. Rob stopped kissing Brandy and spun around. His brain tried processing what he was seeing but it couldn’t.

‘H…hey! What the…’ it bit into his throat drinking deeply, the words gurgled into nothing as his life pumped away. Brandy screamed and the creature turned his bloody smile to her, she wanted to run, to hit out at it but she was frozen in terror. Brandy’s scream stopped when she ran out of breath and terror stopped her from taking another one. The creature stepped towards her, biting her under her left ear.

Shivering she waited for death, Rob was already gone. The creature stopped, jumping back clawing at his mouth. He spat and spat, gulping seawater. Brandy was too shocked to move. What had happened? She should be dead. He washed his mouth out, spat again and turned back to her. Instinct told him to kill her or his hunting ground would be under threat.

Moving faster than she was able to, he tried to bite her again, this time on the neck. Just as suddenly he whirled screeching in anger and pain, leapt back into the sea, again filling his mouth with water. Brandy stood on shaky legs and backed away. He advanced, screeching but she had been given a 2nd chance and wasn’t about to lose it. She screamed back in his face, disgusted at the green foam that was pouring from his mouth. She kept backing away slowly, slowly. They both knew that if she made it to the bank, she would be visible. The creature was confused. His mouth was burning and the only relief he got was from running the fresh seawater through it. He couldn’t anymore, he turned back to the sea and filled his mouth.

Brandy took off like her life depended on it, which it did.

The creature wasted no time, he grabbed Rob’s leg and pulled him into the sea where he would eat him at leisure. Once his mouth stopped burning.

Brandy returned with some burly lifeguards minutes later but all they found was a huge puddle of Rob’s blood and drag marks into the sea. The official report said shark, how the shark bit him on shore was never clarified.

Brandy returned home hours later after giving the police her story. They didn’t believe her but had no reason to hold her. There was no way a tiny woman like her could overpower Rob and she had no reason to kill him.

That night after a warm shower and lots of tears, Brandy applied her nightly creams for her psoriasis. It contained Salicylic Acid, deadly to the sea creature. It saved her life. She would never know that the skin condition that she hated, had saved her life.