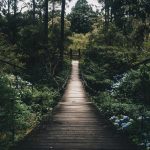 The command was aimed at scaring the hell out of any unsuspecting traveller along the Mountain Pass and it did!

The huge, old man lifted his lantern higher and stared into the pale face of the traveller.

‘You look tired. How about a night at the Creaky Pines Inn? We have room but no stew tonight. Come, come.’ The old man gestured and started walking back along the creaky bridge.

‘Th…thank you but I really want to further my journey and I don’t have much money.’

‘No. No. You cannot travel this road in the dark, its dangerous.’ The old man stretched the ssss so it sounded like dangeroussss. Peering forward again the old man warned ‘Howley wolves wait for a morsel like you.’ The traveler gulped, dared another look into the old man’s face and decided not to risk it.

‘How much you got?’ The traveler held out his coins, the old man squinted at them and nodded, grabbing them out of his hand.

‘No stew or bowls tonight my love.’ The old man hollered to his deaf wife who was wiping the bar counter with a manky rag. She didn’t hear and he muttered under his breath frustrated.

The traveler followed him in. He spent his night on a prickly hay mattress with an old sheepskin for company. He didn’t know how lucky he was to have made it over the bridge and out alive.

Another dark night and 2 travelers were crossing, careful not to slip in the misty rain.

‘Halt who goes there?’

‘It’s the Direly brothers. Who are you?’ they shouted back. The old man lifted his lantern showing off his pitted skin and yellowed teeth.

‘You’re on my bridge. You look tired, come stay the night. We have room at the Inn.’

‘Thank you but no. We want to keep going.’

‘In this awful weather, you’ll catch a cold.’ For effect the old man shivered and gathered his dirty coat closer. ‘You’ll want to get some rest, how much money do you have?’

‘Move over old man, we said no!’ the bigger brother stepped forward. The old man didn’t budge. ‘Well then you pay to use my bridge.’

‘We’ll do no such thing!’ They rushed forward to push him out of the way. Niftily, belying his age, he stepped back and shifted a wooden lever to the side. A hole opened up in the bridge and both brothers fell through. There was a sickening crunch as they hit the rocks below. Nothing else was heard. The old man, now with a skip in his step went to fetch his wife to help carry the bodies.

‘There’ll be stew and bone bowls tonight,’ he smiled.